The Magic Of Crashing Stars
An interview with Tender Forever 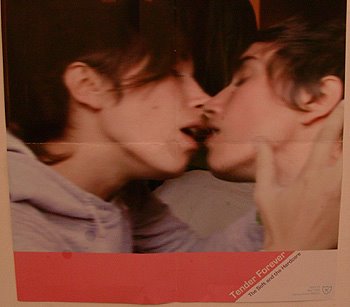 1) How did you get in touch with K Records and how was working with such a unique label?

Well there is no receipe to find K. It is K that actually finds you. I've always been really into soul music, especially Motown. The first indie label i listened to was Dischord and then it naturally occurred that i found myself in love with bands like Mirah or Little Wings. Then i read about K, met people, set up shows for some them. I never thought that the day i sold my clothes to go on tour with The Blow and Squeeze Me I Squeak in California in April 2005, the trip would actually end in the Dub Narcotic Studio in Olympia. Calvin asked me to record the day after he saw me perform at the Scream Club house (very unique band from Olympia - WA), under the roof where people have to lay down and the artist plays on his knees. All my equipment was plugged into the tiniest amp you've ever seen. Calvin showed up and liked it. The next day i was extending my trip and recorded with him and Khaela Maricich at the studio. It was magical, relaxed and a lot of fun. He let me do what i wanted, made me understand that what matters is what you really have in your heart and how you want to give it. That's the whole thing about K records - they have so much respect for music, people and the world. They are truly making it a better place. That is very special and I'm glad i can contribute to that.


2) The album is twelve songs lasting for less than half an hour, but it sounds complete and done, like a declaration of love, which doesn't need many words. Do you feel it could sound this way?

This album is totally a declaration of love: yes, you totally got it right. And when people tell me that it's too short i usually answer that i didn't have much more to say. The feeling is here, my heart has been opened with a knife and it is just pouring out in the world, for the world and with the world.

3) In your songs your voice is at the same time delicate and excited, warm and strong, urgent and serene. Is it because it is so tightly connected to what you sing?

When i was 12 years old, i was fascinated with the energy Michael Jackson, as a kid, was radiating on stage. It was so impressive and really alive as a show. In an interview he said that he would never sing something he wouldn't feel. It really left a deep mark and i started to understand that music was not entertainment but more like something that someone created, sang and felt. It blew me away. It is very true that my album is very personal and every single word are coming out of my heart. It feels extremely natural to sing them and feel them. It is me, it is "Tender Forever".


4) Your biography reads you were in a sixties cover band: did this have any influence on your music? It seems that you feel the same comfortable with electronic and acoustic instruments.

Well, i started music in the streets of Bordeaux - France, covering oldies, mostly Motown music 2 years ago. That's how i learned to play guitar, to feel music and and loved performing. I think it totally had and still has an influence in the way i make music. The process is kind of crafty cause i use what i know and what i have : a guitar, a bass, a keyboard, a computer, my voice and my heart (which is the most important instrument). The way i proceed is pretty chaotic for some of people i worked with, but it makes sense for me. People always ask me what software i use, but i find them very surprised when i tell them: only real instruments and a little bit of electronic beats. For example on the song Tender Forever i used the crappiest electronic drum pad and played it with a wooden spoon in one hand and a plastic chopstick in the other. That comes from the streets, that comes from the: "i want to do it, I'll do it that way, right now!".


5) What does "hardcore" mean for you in this record?

Well, some people have a nice life, some others have a tough one and problems related to it, whatever your life is, hardcore or smooth. We are all struggling, you are struggling, i am. Life can take you down one day and be fully amazing on the next. I like it like that. I'm glad life is not too sweet cause i would lose the sense of reality. And "The Hardcore" doesn't have anything to do with suffering, violence and pessimism. It is the opposite: it helps us to see clear, gives us a lot of strength and keep us our feet on the ground. I need both - the soft and the hardcore - cause i never want to be used to anything.

6) Why did you choose to sing english? Do you like singing in french too, or your songs would sound too different?

That's a question i get a lot. I'm glad that people are sensitive to the language cause it is something I'm sensitive to as well. Well, when you want to make yourself understood from the person you're writing the songs for, you want make sure that she would get it. She would have been Spanish, i would have done it in spanish. But it is true that it comes out easier that way cause i spend more time in the USA than in my own country and most of my influences in music are from across the ocean, since i was a kid. I discovered music from France later on. I miss the USA when I'm in France and miss France when I'm over there. But English is extremely different than French. It is a language in which people are more creative. They can have song only made out of slang and it sounds fabulous. France has more a culture of theatre, literature in its history. Words are really hard to play with and it is not easy to sing about something lovely in a very simple way. I personally find my own in both. My brain and heart are cut in half, like a person lost in "translation" cause my life is all about travelling, language and music. But i'm working on some new songs with French and English mixed together. I'm excited about them cause i feel like it will sound like Tender Forever, anyway. It'll still be my heart making it and not somebody else's.


7) What is the reason behind the lovely name "Tender forever" you're playing under? I do find it so much representative of what you actually sing about in the album, a sort of a manifesto.

I made a promise to myself a while ago - to be more tender - cause it is something I have trouble to be sometimes. I promised to myself also that i would never never ever give up about the world. I won't veer off of the path. I love the world so much, i have so much energy but i have trouble using it. When that happens I get angry, grumpy and sad. It is a manifesto, a promise and i wish that people could promise to themselves tiny things, like "inside challenges" and give their best to accomplish it. Tender is the reason, Forever is the promise. It is like a tattoo: for life.

8) What do you sing in the shower?

Right now : "Climb Every Mountain", "Say My Name" and some "Squeeze Me I Squeak" too.


9) I saw on the internet some videoclip of your live shows, and even if you are alone on stage they are very involving. What (or how) do you want to make the audience feel?

I wouldn't play music if i couldn't perform. It would be awful not to perform more than once a month. I love being on tour and I love people so much. It is a blast to meet them, see their country, get to feel it and finally talk to/with them. A show is not only a place where you find yourself on a too tall podium and say thank you between each song ; it is a very special place where people actually listen to you and where the conversation is possible. It's a two person game : the audience and you. I hope it always feels like everything is possible. Hopefully they feel pumped up, ready to blow up like a balloon and optimistic with this idea that they're gonna have to fight for it to be well done: their lives.